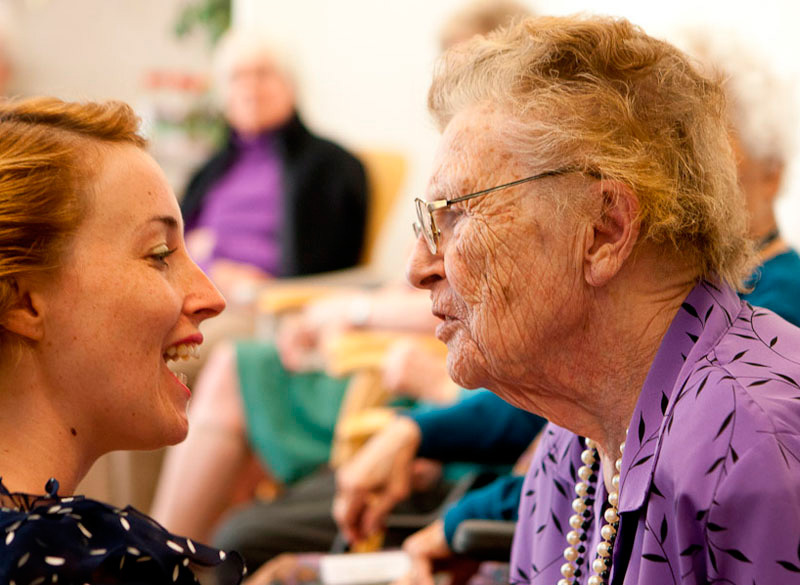 Every human being has the need to be able to communicate and engage. It prevents loneliness and gives people a sense of belonging. For vulnerable people, such as older people with dementia, communicating and therefore establishing reciprocal contact might become harder as time passes.

Contact
The Veder Method is an interactive and lively way of inviting vulnerable people to engage in contact. This is not only pleasant for the person who has difficulty making contact, but also for people surrounding them such as family members and caregivers. Carers who apply the Veder Method, will find increased joy in their work because they are able to engage the people they care for in reciprocal contact.

Addressing long-term memory
When the Veder Method is used with people who have memory problems, the long-term memory is addressed, because this is what remains intact. Reminiscence – recalling memories – plays an important role in this method. Through recognizable, positive memories, elders with memory problems will often feel at home again. By tapping into a person’s long-term memory, they will quite likely feel their identity is being validated and they are being appreciated as a person. In this way, their sense of self-esteem and confidence increases.

Scientifically proven effects
The Veder Method is unique because it combines the positive effects of reminiscence with theatrical elements such as poetry and music. The Method enables older people to open up more to the people around them and engage and communicate with them, which is an important contribution to their well-being. Scientific research has shown that the Veder Method has a positive effect on the caring relationship and communication between residents in care settings.

In performances or everyday activities
The Veder Method can be applied in different ways. For example by putting on performances in living rooms of care settings. It is offered as an interactive group activity through which residents of care homes are being tempted to engage and communicate with the performers.
Besides using it as an activity, separate elements of the Veder Method can also be used during everyday care activities. The Veder Method is then used purely as a contact method. Examples of this are making one-on-one contact during greetings or goodbyes, meeting a person in their own world by singing together and reciting poetry or rhymes during everyday tasks. Intonation and acte de présence play an important part in this.

Different target groups
The Veder Method is applicable for diverse groups, for instance for people with varied cognitive impairments, or psychiatric disorders.

Time flies…
Health care professionals can often feel like there is just not enough time in their day to make proper contact with patients or residents. Opposed to this idea of stopwatch care, Veder wants to put the philosophy that time flies when you’re having fun. This is based on two ancient Greek concepts of time: chronos and kairos. Chronos deals with clocks and deadlines whereas kairos is an opportune moment, a moment in time in which something special happens. Kairos can be time for, for example poetry, passion, attention, happiness, flow, beauty, or fun. It requires space so time can be enjoyed. The Veder Method aims to build a bridge between chronos and kairos. Taking time to establish kairos, results in saving time in chronos.

“I am positively surprised. It often takes us months to win the trust of our residents and
get them to engage. It is wonderful to see how quickly this happens during your living room theatre!”
(Teamleader Archipel, Eindhoven)

“Since our employees apply the Veder Method, our residents are more calm and the employees make contact with them more easily. They also sympathize better with the condition of the residents. And they enjoy their jobs more. Isn’t that marvellous?!” (Unitmanager nursing home Wittenberg, Amsterdam)