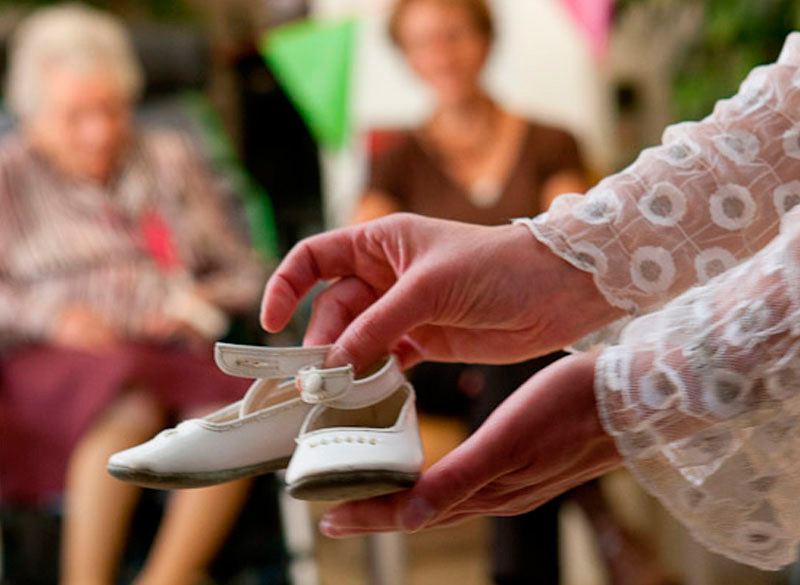 Theatre Veder was established out of a desire to do things differently. While working as a nurse, founder Marieke Westra noticed there was hardly ever any time for genuine contact between people in health care. She felt she needed to do something to contribute to change.

So much work to do
In one of the hospitals where Marieke Westra – now director of Theater Veder – worked, a man was waiting for hours for a taxi to pick him up to move to a different nursing home. He was sat alone, on a bench in the hallway. Every now and then, Westra, with the best intentions, would talk to him while passing: “Have you still not been picked up? That is unfortunate.” But the man suffered from memory problems and had difficulty communicating, therefore he never replied. Westra understood that what she really should do, was sit with him for a while. Only then there would be a chance of actually engaging with him. But what would her superiors and colleagues think of her? There was just so much work left to do! She did not go and sit next to the man. But the feeling that something about that situation was not right, never let go of her.

Focus on contact
After a dramatic life-changing event, Westra decided to give her life a different direction. In 2004 filmmaker Theo van Gogh was murdered in front of her eyes in her hometown Amsterdam. The inability of people to communicate properly, in a humane way, was her reason to focus on contact. She wanted to do something with this inability of people to establish reciprocal contact, or to connect with each other. This lead to the establishment of The Veder Foundation in 2005, a non-profit organization, aiming to spread the Veder Method as a contact method.

Performances
The foundation’s first living room performances were performed in 2006. Those interactive performances were put on by professional actors in which residents are tempted into making contact. They showed that music and theatre, but also poetry were very efficient tools in establishing moments of contact.

Transitional programme
The success of the Veder Method led to The Veder Foundation being able to take part in a government-funded transitional programme for long term care between 2008 and 2010, meant to encourage promising new initiatives improving the quality of long term care in The Netherlands. Because of the funds, the Veder Method could be expanded nationally and an extensive programme of training and courses could be developed to spread the method to care institutions and caregivers. Now, Veder is consists of a team of professional actors, trainers and coaches, nearly all experienced with working in both care settings and art organizations.

“I would like to thank you for the informative, enjoyable and suitable fulfilment of our volunteers night. The volunteers enjoyed the performance and music very much.”
(Coordinator volunteers Rotterdam)

“It was a fun, challenging workshop that makes you aware of what is truly important in caring for others, which is communicating and engaging with each other.”
(Participant in Basic Training)

“Applying the Veder Method is like recharging our batteries. Especially preparing the performance with my colleague gives us so much energy. We are always laughing so much in anticipation of performing our ideas!”
(Employee Eindhoven)